We are excited to present to you, Newborn Screening- The Indian Perspective, by  Dr. A Radha Rama Devi and Dr. Arun K Singh The aim of the webinar is to raise awareness and address concerns regarding New born screening.

Newborn screening (NBS) is now a well-recognized public health program in many parts of the world and even mandatory in certain countries. However, in India, which is the largest populous country next to only to China, NBS is still not a priority to be implemented for the welfare of people due to a number of reasons mainly the lack of political will. In such a scenario, how best the fruits of screening can be passed on to the public to benefit at least those with suspected inborn error.

This webinar will be hosted by Dr. Reena Kartha, Board Director of Research Programs at IndoUSrare

Dr. Radha Rama Devi is a pediatrician and clinical researcher with 42 years of experience in medical education. She is the President of the Indian Society of Inborn Errors of Metabolism. She has 90 publications in national and international journals. She has won numerous awards including the President’s Medal in MBBS, Gold Medal in medicine, Senior Women Bio Scientist Award from the Department of Biotechnology (GOI)in 2005, Dr. I.C.Verma Outstanding Researcher Award in 2018, and a Life time Achievement award in Inborn errors of Metabolism by the Hyderabad branch of Indian Academy of Pediatrics. She was listed as one among the Top 10 women in Medicine in 2007. She started large scale newborn screening in India and has promoted the importance and awareness of Inborn Errors of Metabolism and management.

Dr. Arun K Singh is the Head of Department of Neonatology at All India Institute of Medical Sciences (AIIMS) Jodhpur and the National Advisor, RBSK (Rastriya Bal Swasthya Karyakram) (National child Health Program) under Ministry of Health, Government of India. In this role, he conceived the program for all children of the country from birth to 18 years for universal screening and management, developed and wrote the training manual for screening by basic health personals, and has helped in implementing RBSK in all the states of the country. 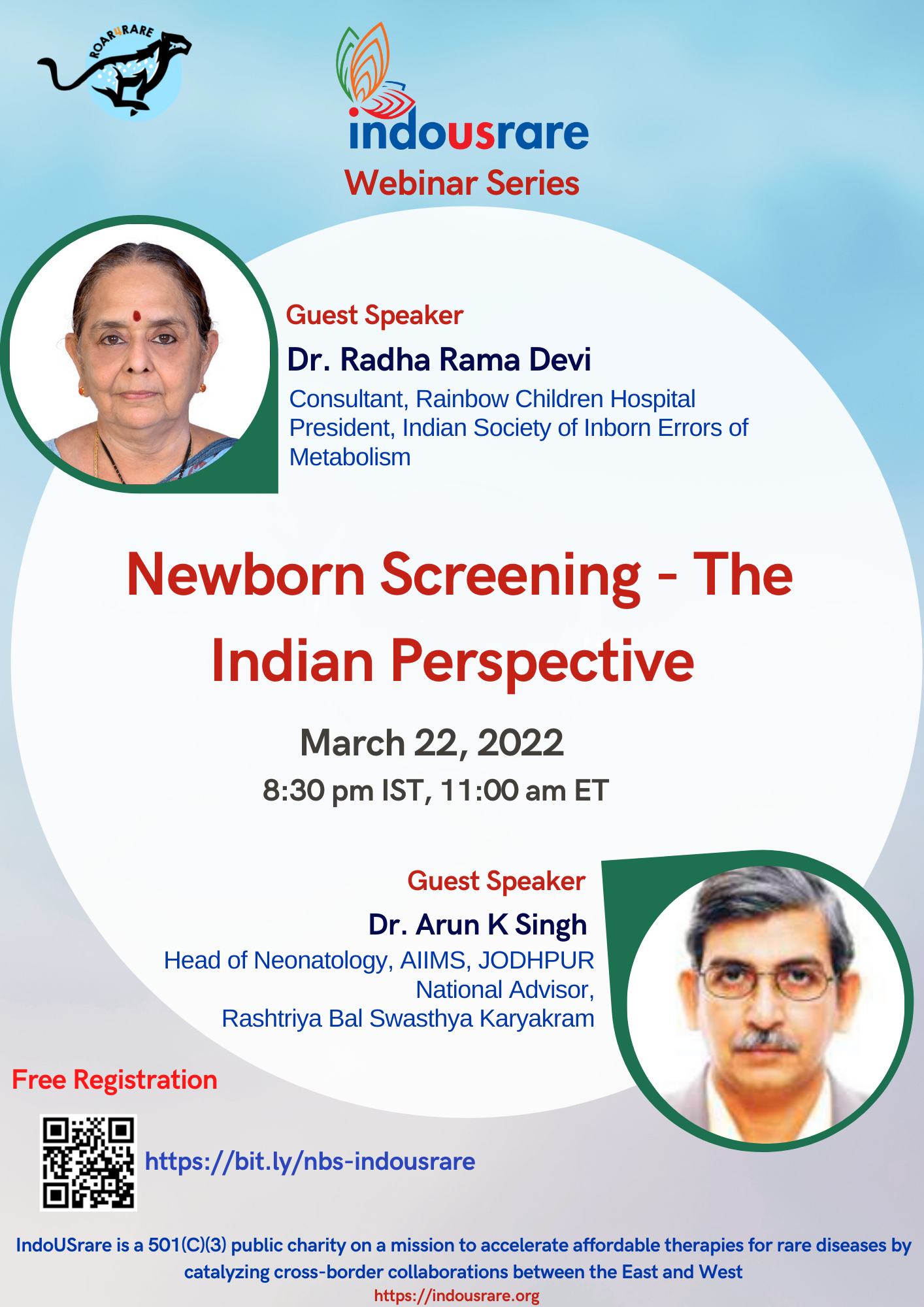 Kanan Lathia is an Ambassador and scientific consultant at Indousrare.She has spent 20+ years as a research scientist focusing on neurodegenerative diseases, cancer, and HIV. She has also worked as a project manager supporting teams in building brain maps of the first 1000 days of babies. Kanan’s passion for rare diseases is driven by a personal cause. Her work with Dup15q Alliance strengthened her passion for giving back to rare disease families. Kanan hopes to scale the organization’s efforts by securing funding and building a patient alliance membership program. Kanan loves yoga and spending time between the US and India.

Dr. Krishna Ramaswamy is a life science professional with experience in research, management consulting, and business development in academia and industry. She has a Ph.D. in Biological Sciences from University at Buffalo, SUNY, and pursued postdoctoral research in cell biology from the University of Southern California, Los Angeles. She has worked as a consultant for the biotech/pharma industry and worked with Dr. Harsha and ORDI in the past for about 2 years. Dr. Krishna currently resides in Hyderabad India and has a keen interest in the rare diseases space and would like to bring awareness about the various diseases, diagnoses and treatments that are available and those in the pipeline. She first began working in the rare disease space during her postdoctoral training and has worked on peroxisome biogenesis disorders under the guidance of Dr. Joe Hacia at USC.

Neeraja is in her junior year of high school, studying at a School in Gurgaon, India. She has completed all 8 grades in a set of vocal examinations conducted by Trinity College as the captain of the Student Council in her school, currently serving the post of House Captain. Neeraja aims to find solutions to the problems associated with the fields of healthcare, technology, and sustainable development. She is passionate about teenage welfare and has founded a youth-centric organization called ‘Discover Yourself’ through which she aims to inspire, and collaborate with young people across the world and wants to bring awareness regarding various teenage and adolescent issues